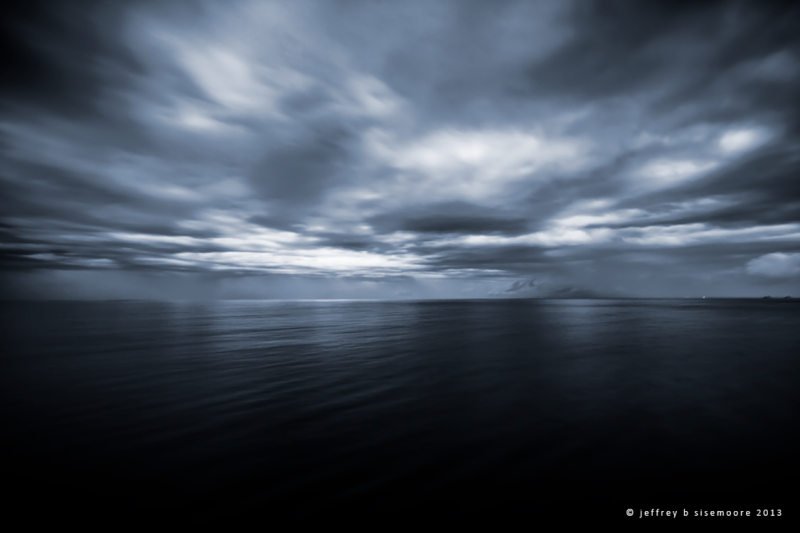 Posted by Jeff (Honolulu, United States) on 6 June 2013 in Landscape & Rural and Portfolio.

This scene greeted me upon waking the first night of the cruise off the coast of Italy. I made the image from the deck at my cabin.

The original image was rather flat, so much of my processing centered around enhancing the clouds and light on the water (both the reflection and the narrow line on the horizon which is lighter that the sky behind and the rest of the sea). This is not a duo-tone image, or one where a filter provides the color. The original sky and water, to the unaided eye, was all gray/blue of subtle shades at that early hour.

I kept the small amount of land rather soft to suggest the first sighting of land and to add a bit of mystery to the image. There is also a single light on the far shore. In the original image, which measures 60 X 40 inches, this light is very eye-catching, also adding to the notions of first sighting and mystery. It is not so easily seen in the smaller internet version of the image.

Wonderful light!
Have a good day.

A dreamland for me.

Wonderful light with this exposure.

This is just wonderful Jeff..and I love the clouds...you really did a nice job working on this piece...great insightful text and, as always, just a damn sweet shot!!!

For me, the best element of this photo is the strips of both light and dark, right on the horizon. It draws me forward to the mystery ahead. You've done a great job of processing.

Beautiful capture as everything appears to be rushing toward us!! I love that smooth water surface.

brilliant! this photo has this timeless and surreal feel about it that seems to transcend our reality and physical constraints! wonderful shutter speed and breathtaking mood!

Congratulations on your SPOTLIGHT

Congrats on the Color Spotlight!!!

Congratulations on the SPOTLIGHT !!!!

you got a spotlight too, great and congrats. The sky is meeting the ocean, beautiful pic.

An excellent choice for the Spotlight, congratulations!!

Great shot, congratulations for your Spotlight!

I'm being sucked into this wonderful image ..........
Great tones and light!
Congratulations :-))

Congratulations on the Color Spotlight !!!

Stu from From Scotland | Living in 京都 Kyoto, Japan

Congratulations on the Color Spotlight!

Congratulations on 'The Color Spotlight'. Have a wonderful day.

Very impressive! Congratulations on the Spotlight!

Absolutely beautiful! Congratulations on the Spotlight!

Wow, what a beautiful shot, congratulations!

I love what you did with this, thanks for the explanation below! It's got impact and the sky is dramatic, well done!

Congratulations on the Color Spotlight.