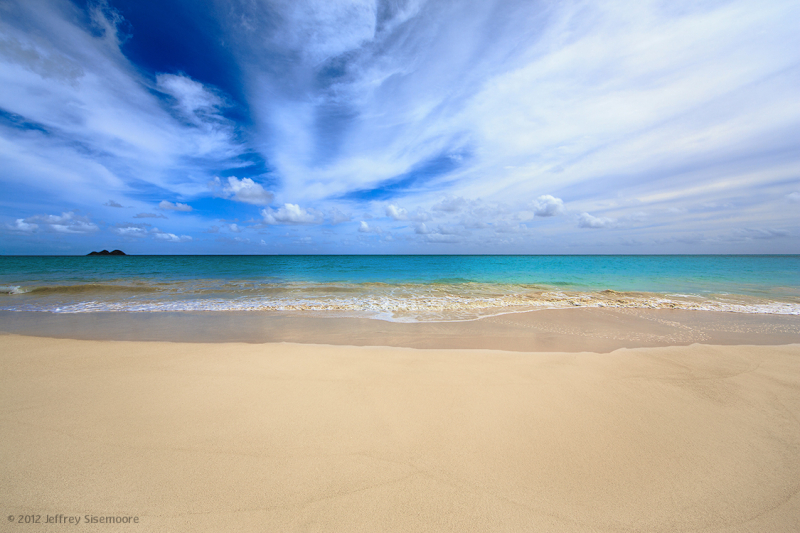 Posted by Jeff (Honolulu, United States) on 20 March 2013 in Landscape & Rural and Portfolio.

This beach is a gem, used mostly by local folks who know where it is. It is off the beaten path, has very little parking (just enough for the few people who know about it), and it is always uncrowded. I made this photograph late one Saturday morning when no more than five or six small groups of people were spread out over at least 300 - 400 yards of shoreline. Everyone had a private slice of heaven and I had a pristine stretch of beach to photograph.

If you know where to look, there are beaches like this all over Hawaii. Most of them either don't have names or have local names not likely to show up in a tourist guide.

A beauty! Have a nice day.

This is the first step into paradise !

The beaches at Pelee are most times quite empty of people so when we go it's our slice of heaven also. What a fantastic capture Jeff, that sky is awesome. The beach and water look so inviting.... what would be the temperature of the water? Such Paradise!

I want be there in that summer scene, stepping into the ocean.

Gorgeous ! A great capture, the sky is fantastic !

A slice of paradise for sure.

Beautiful shot in its simplicity! I love the strong horizon.

Excellent choice of lens length and positioning of that island, super shot.

It is beautiful and looks very peaceful. Good for you to keep it for yourself!

A beautiful shot for the 'Ray of Light' collection!

This image has been featured in 1 Remix collection.